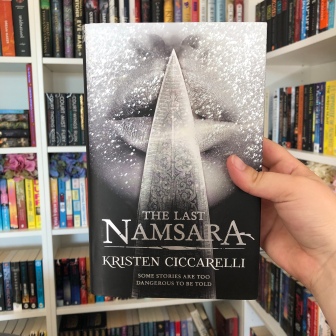 In the beginning, there was the Namsara: the child of sky and spirit, who carried love and laughter wherever he went. But where there is light, there must be darkness—and so there was also the Iskari. The child of blood and moonlight. The destroyer. The death-bringer.

These are the legends that Asha, daughter of the king of Firgaard, has grown up learning in hushed whispers, drawn to the forbidden figures of the past. But it isn’t until she becomes the fiercest, most feared dragon slayer in the land that she takes on the role of the next Iskari—a lonely destiny that leaves her feeling more like a weapon than a girl.

Asha conquers each dragon and brings its head to the king, but no kill can free her from the shackles that await at home: her betrothal to the cruel commandant, a man who holds the truth about her nature in his palm. When she’s offered the chance to gain her freedom in exchange for the life of the most powerful dragon in Firgaard, she finds that there may be more truth to the ancient stories than she ever could have expected.

With the help of a secret friend—a slave boy from her betrothed’s household—Asha must shed the layers of her Iskari bondage and open her heart to love, light, and a truth that has been kept from her.
(Goodreads)

I got this book in a previous Fairyloot box and now I finally got around to reading it. It has been long overdue. The fact that this is Ciccareli’s debut novel shows great promise of her future work.

My overall thoughts of this YA Fantasy was that I thought it was great! It sank its claws into me and gripped me from the get-go. The reason I didn’t give it that last star was because I felt something was missing. That extra oomph to really take it off this world and to another level of fantasy.

It was an easy read with a great flow of the story, the pacing was not too slow and the language wasn’t too tricky like it can sometimes be in fantasy books.

I enjoyed the twists and turns. At first I thought that it could have been a standalone, with how it felt like the story would wrap itself up by the end, but thankfully that didn’t happen and I get to look forward to more of Asha and Torwin in the sequel, The Caged Queen.

Asha was a strong character and went through a nice development where she discovered  more about her true self. She was strong and independent and didn’t rely on others but herself.

If I must say, I wasn’t quite sold on the romance between Asha and Torwin. It lacked something, which I hope will improve in the sequel. Perhaps it was that Asha was doing well on her own and I think it would have been refreshing to read about a fierce female lead where romance did not implicate her life even further. But alas, us readers drink up YA romance like no other.

The world-building was good, but it didn’t dive too deeply into it. It stayed on the surface with a lot of the things, but it did enough to spark interest in me to learn more about this world and the history of things. Hopefully, in the sequel we’ll dive deeper into the history of the Iskari and Namsara.

All in all I thoroughly enjoyed The Last Namsara and if you’ve read this book I’d love to know your thoughts on it too.