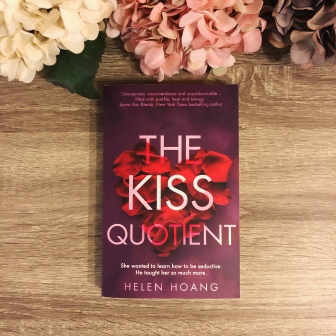 Stella Lane thinks math is the only thing that unites the universe. She comes up with algorithms to predict customer purchases — a job that has given her more money than she knows what to do with, and way less experience in the dating department than the average thirty-year-old.

It doesn’t help that Stella has Asperger’s and French kissing reminds her of a shark getting its teeth cleaned by pilot fish. Her conclusion: she needs lots of practice — with a professional. Which is why she hires escort Michael Phan. The Vietnamese and Swedish stunner can’t afford to turn down Stella’s offer, and agrees to help her check off all the boxes on her lesson plan — from foreplay to more-than-missionary position…

Before long, Stella not only learns to appreciate his kisses, but to crave all the other things he’s making her feel. Soon, their no-nonsense partnership starts making a strange kind of sense. And the pattern that emerges will convince Stella that love is the best kind of logic…
(Goodreads)

I must start off by admitting that I haven’t really read any books where the main character is autistic or has some form of mental disorder.. is that what we call it these days? See, I’m not even sure, that’s how out-of-the-loop I am.

Anywho, I had heard quite good things about this book and in a weak moment browsing for books online, it somehow ended up in my cart (it was not alone, of course) and I do not regret it one teeny bit!

I loved this book!

This book had it all: it was steamy, cute, romantic, funny, sad and all round amazing!

The only thing I wish it had was more pages!

Our main character Stella is this gorgeous young woman who is a work-a-holic and lacks some serious socials skills, which is due to her having Asperger’s, but it provides some levity and humour throughout the story. It also gets her in some trouble along the way because the people she meet doesn’t know why she’s acting a little strange and maybe says some rather direct non-thinking things, which is apparently something you do if have a condition like Stella’s?
I wouldn’t know because I don’t think I know anyone with such a mental disorder.

But Stella manages to work around it and fight herself to get what she wants – experience in the bed, which turns out to be a lot more than just sheet gymnastics. She ends up getting a lot more than she thought she would.

Enter Michael – the hunk she hires to teach her about sex, but ends up getting a valuable lesson or two in return.

I really enjoyed Stella and Michael’s dynamics and they complimented each other very well and that just made the flow of the book so much easier to read and it was over far quicker than I wanted it to be. Like I said, I could have used some more pages. Just another hundred or so..

The language was easy to read and the pacing was good. The side characters (Michael’s cousin and family in particular) added something extra to the story and I found myself wanting to get to know them better.

All in all this was a book I enjoyed so much and I cannot recommend it enough!

Have you read it? What did you think?

Let’s chat about it in the comments.

7 thoughts on “Review – The Kiss Quotient”